23. Februar 2011 By pwirth in International, Statistik 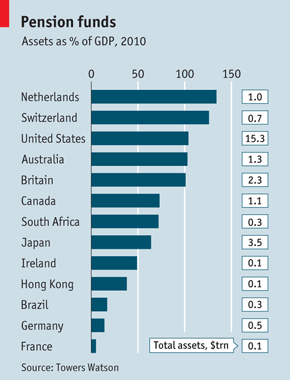 According to Towers Watson, a consultancy, the total assets held by pension funds in the 13 biggest markets were worth $26 trillion at the end of 2010, 12% more than a year earlier. Taken together, these countries accounted for 85% of the holdings of the global pensions industry. Funds in America, the world’s largest pensions market, had assets worth $15 trillion. South Africa was the fastest-growing big market last year, with pension-fund assets up 28% from a year earlier. At the end of 2010 Dutch pension funds held assets amounting to 134% of the nation’s GDP. In France, where most pensions are unfunded—with benefits financed by current contributions—the corresponding figure was a mere 5%.