2. Dezember 2011 By pwirth in International 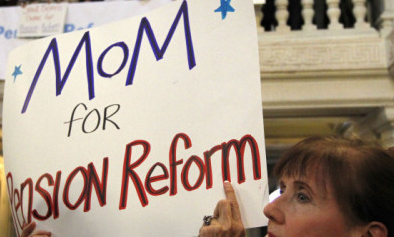 Lawmakers in the US must address the pension reform issue in the face of rising pension costs, declining pension reserve funds and the current state of the nation’s financial markets, they argued.

"The unfunded (pension) liability is somewhere between $1.5 and $3 trillion," said former Pennsylvania Lt. Gov. Mark Singel (D) about the total liability among the 50 states.

Meanwhile, in Utah, a new hybrid plan came into effect last year after pension fund projections forecast a possible bankruptcy of the fund within 20 years. State Sen. Daniel Liljenquist (R-Bountiful), the local legislature’s retirement committee chairman and an author of the measure, said the new plan moved state employees to a 401(k) like retirement system, with a defined contribution put into place for workers. He noted it also moved to reduce the state contribution going forward and change cost of living adjustments, which is a part of the plan adopted in Rhode Island as well.