Bill Gross, the co-founder and co-chief investment officer of bond giant PIMCO, says it is time to write the obituary for stock investing as we know it. Writing in his August investment letter, the manager of the world’s largest bond mutual fund said lower returns on stocks — and bonds, for that matter — means individuals will have to work longer to save for their retirements. "If financial assets no longer work for you at a rate far and above the rate of true wealth creation, then you must work longer for your money," Gross wrote. 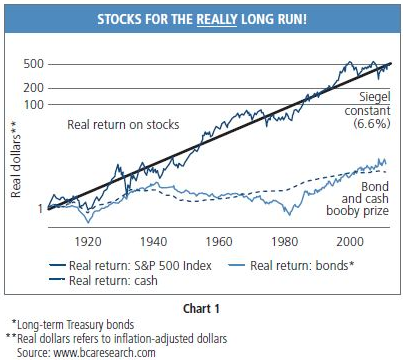 Gross, whose Pacific Investment Management Co has $1.82 trillion in assets, took particular issue with the noted economist Jeremy Siegel, who popularized the notion that a portfolio of stocks can return on average 6.6 percent over the long haul. "The Siegel constant of 6.6 percent real appreciation, therefore, is an historical freak, a mutation likely never to be seen again as far as we mortals are concerned," he said.

“Yet the 6.6% real return belied a commonsensical flaw much like that of a chain letter or yes – a Ponzi scheme. If wealth or real GDP was only being created at an annual rate of 3.5% over the same period of time, then somehow stockholders must be skimming 3% off the top each and every year. If an economy’s GDP could only provide 3.5% more goods and services per year, then how could one segment (stockholders) so consistently profit at the expense of the others (lenders, laborers and government)? The commonsensical “illogic” of such an arrangement when carried forward another century to 2112 seems obvious as well. If stocks continue to appreciate at a 3% higher rate than the economy itself, then stockholders will command not only a disproportionate share of wealth but nearly all of the money in the world! Owners of “shares” using the rather simple “rule of 72” would double their advantage every 24 years and in another century’s time would have 16 times as much as the sceptics who decided to skip class and play hooky from the stock market.”