For the pension plans of the 30 largest Swiss multinational companies which make up the Swiss Leader Index (SLI), 2010 was a good year. The assets in the SLI companies’ pension plans increased to CHF 144.5 bn (+2.3%), a study by the consultant Towers Watson shows. The improvement is not only down to good investment returns of 6.5%. The pension liabilities increased by a smaller margin than the assets to CHF 161.6 bn (+1.4%). The overall funding ratio was 89.4%. This shows that the SLI pension plans are better funded than those of the Fortune-1000 companies (83%) and the DAX companies (66%). However, the most recent turbulence in financial markets will likely mean that the funding ratio will be lower at the end of 2011. 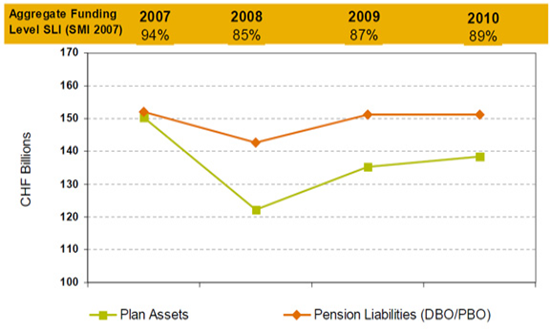 These are the results of the study “SLI Pension liabilities 2010” by Towers Watson. The consulting firm has analysed data from the annual reports of the companies in the Swiss Leader Index (SLI) over the period 2007 to 2010. The pension liabilities considered were those as calculated under the international accounting standards IFRS and US GAAP.

“During 2010 the markets were still recovering from the sub-prime crisis and consequently only a small improvement in the funding ratio was possible. The Euro debt crisis of recent months means that the outlook for 2011 is no better: a large reduction in the funding ratio of about 10% (per September) should be expected”, explained Peter Zanella of Towers Watson.

The recent turbulence in the financial markets will further reduce the funding levels of the SLI pension plans in 2011. First, the return on plan assets has been negative due to the recent falls in the markets. Second, the reduction in discount rates will lead to increased liabilities. “We expect, that the aggregate funding level of the SLI companies has reduced significantly to around 80% per September 2011”, explained Peter Zanella of Towers Watson. Therefore the funding levels may be lower than at the end of 2008 at the height of the last financial crisis. The funding levels of plans of foreign companies will also have decreased by a similar extent and so overall the Swiss companies would still be expected to have a higher funding level than foreign companies.”