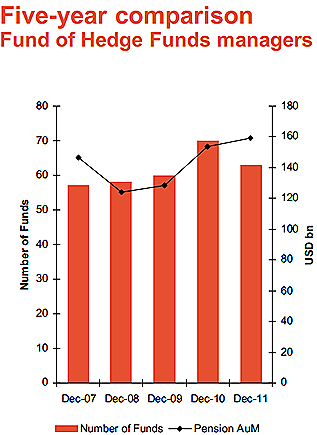 Pension funds are continuing to raise their exposure to alternative investments, according to data collected by Towers Watson, the consultancy.

The Global Alternatives Survey by Towers Watson in association with FTfm, which is now in its ninth year, found that the total pension fund assets under management held by the top 100 asset managers surveyed rose 7.9 per cent, from $951.7bn in 2010 to $1.03tn in 2011.

The rise follows an even steeper 16 per cent increase in pension fund assets under management recorded by the top 100 asset managers in the previous year. Striking though the trend towards increased investment by pension funds in alternatives may be, Towers Watson clearly thinks data collected in previous surveys no longer tell enough of the story.

There has been such a permanent shift in the investment landscape that Towers Watson has this year expanded its analysis to include insurance companies, sovereign wealth funds and endowments and foundations, as well as new investment choices: namely direct investments in private equity funds and hedge funds. The total universe of the research now includes data from 493 managers.