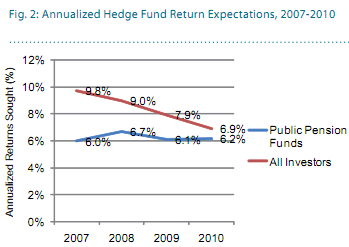 Preqin examined the ﬁnancial statements of over 150 public pension funds from North America, Europe and the UK to ascertain how well their investments across various asset classes were performing.

The study by the London-based research firm shows that Bridgewater Associates ranks as the most popular hedge fund among public pensions.

Despite negative returns over a three-year timeframe, public pensions have increased their allocations to hedge funds. Nearly 300 public pension plans worldwide now invest in the asset class, a 51% increase over the past four years. Preqin’s database of institutional investors shows that 295 government pension funds worldwide were invested in hedge funds in the first quarter 2011, compared to 196 plans as of Dec. 31, 2007. Additionally, the research indicates that another 49 public plans that are planning to make their first hedge fund allocation within the next year.

Hedge funds have become more popular among public pensions than private equity, according to Preqin’s report. In total, the amount of public pension assets currently invested in hedge funds is $127.3 billion.