Due to financial markets and demographic assumption changes, year-end 2011 is likely to be a painful one for Swiss companies reporting their pension obligations under International Financial Reporting Standards. The median discount rate used by Swiss companies at the end of 2010 under IFRS was 2.75% according to Towers Watson’s 2011 Global Survey of Accounting Assumptions. If set today, pension discount rates would likely be in the range of 2.25% to 2.50%. This would indicate an increase in pension liabilities of some 3% to 6% compared with last year. Furthermore, due to new Swiss mortality tables (BVG2010) which are expected to be adopted by many companies for the first time at the year-end, liabilities could be further increased by around 5%.

The impact will vary by plan depending on the structure of the liabilities and the precise assumptions adopted. Asset returns have not kept pace with the rising liability values. According to the ASIP performance comparison carried out by Towers Watson, the median return for Swiss pension funds was marginally negative at -0.2% for the first half of this year. Returns in the third quarter are likely to have been significantly worse – for example the Pictet LPP 2005 40+ Index fell by around 4% over the quarter. 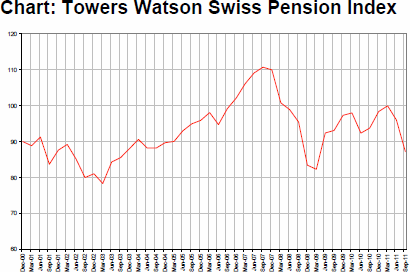 Thus, lower asset values and higher liabilities mean that companies should expect gaps between liabilities and assets to widen at year end, which will also likely result in increases to companies’ pension expense in 2012. Towers Watson’s Swiss Pension Index for Switzerland, which tracks the funding ratio for a benchmark plan under international accounting standards, shows a fall from 98.4 at the end of June to 87.2 at the end of September (see Chart), solely due to the impacts of the discount rate and asset returns.