Top pension funds back to 2006 levels

7. September 2009 By pwirth in International

Total assets of the world’s largest 300 pension funds fell by 13% in 2008 to US$10.4 trillion, down by around US$1.5 trillion from last year’s figure, according to Pensions & Investments and Watson Wyatt research. The P&I / Watson Wyatt global 300 ranking, conducted in conjunction with Pensions & Investments, a leading US investment newspaper, shows that despite last year’s fall in assets, compound annual growth during the past five years is still around 10%. The region with the highest compound annual growth rate (CAGR) during this period is Asia-Pacific (19%) and the lowest is North America (4%), with Europe having a growth rate of 12%. 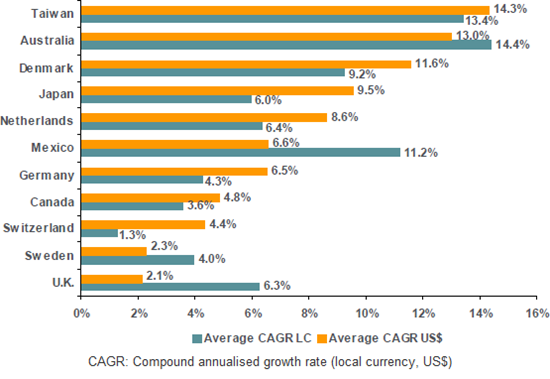 Carl Hess, global head of investment consulting at Watson Wyatt, said: “The world’s largest pension funds were not exempt from the economic crisis and have been set back a number of years. While, over a five-year period, they still show impressive growth, results in aggregate during the last decade have been more volatile. So despite having fared better than many other funds, they will now be focusing even more on risk management and reassessing their governance arrangements to ensure investment returns are more secure in future.”